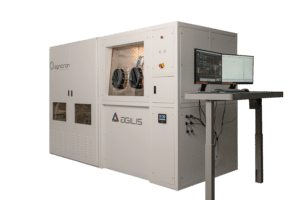 Dr. Martin Kuball, a Royal Academy of Engineering Chair in Emerging Technologies, and a Professor in Physics at the University of Bristol, United Kingdom, gave his extensive review on the GaO industry and on the recently installed and qualified Agnitron Agilis 100 MOCVD system to Compound Semiconductor magazine. This first Gallium Oxide MOCVD system was delivered to and installed in Europe in June 2022. Dr. Kuball started using the OEM MOCVD for advanced research in vertical and lateral GaO and AlGaO wide bandgap semiconductor structures.

“We worked with Agnitron, Dr. Kuball said, “They have done a lot of prior research and investment, and have a very good track record in commercial Gallium Oxide MOCVD systems.”

The full interview can be found in the Compound Semiconductor magazine, Vol. 28, issue 6.