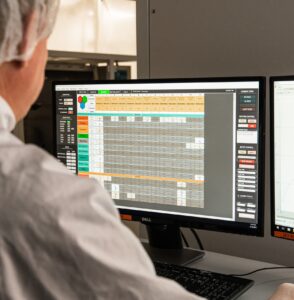 Agnitron supplied Imperium-MOCVD™ Control Software and a Beckhoff Automation programmable logic controller (PLC) upgrade to a large laser manufacturer on the west coast of the US. The upgrade was installed on a legacy Emcore D180 MOCVD system which no longer received factory support. The original system was designed by using analog communication protocol. By upgrading the PLC and the control software, it enabled use of both DeviceNet and analog device communication protocols.

The Imperium platform is a Windows 10 based package and is used for controlling MOCVD and other semiconductor process equipment. Imperium-MOCVD™ is a direct Control Software and Automation replacement for Emcore, Veeco and Thomas Swan and other MOCVD systems and it offers the latest in control technology; setting a new bar for MOCVD control flexibility. The Imperium-MOCVD™ Control Software and Automation upgrades offer the latest in control technology and solves support issues which threaten up time for many users of proven but unsupported MOCVD systems with obsolete control hardware and software.  It was developed in response to demand for upgrading legacy MOCVD tools for state of the art processing and extends the life of proven MOCVD platforms no longer supported by the OEM. Visit our Gen 3 Imperium-MOCVD™ Control Software and Automation page to view current information, as we offer a brochure and data sheet for customer inspection. Contact us today to setup an online live Imperium demo.