Agnitron’s Agilis MOCVD β-Ga2O3 configuration is now available for general market customers and extends the same system configurations as have been used by the Agnitron team to produce reported works in recent articles and presentations*. The configuration has been extended to customers in response to interest stimulated by Agnitron’s ground breaking β-Ga2O3 MOCVD growth work and is capable of delivering state-of-the-art growth performance. This special Agilis β-Ga2O3 configuration is available with single or multi-wafer loading capacity. Of the 5 systems currently in production at Agnitron, three of these systems offer single wafer loading and the other two multi-wafer loading. Provided the flexibility of the Agilis platform, the single wafer systems are designed to be field upgraded to a multi-wafer reactor with minimal efforts. 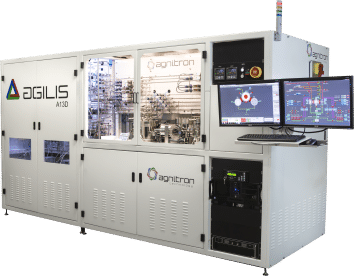 This Agilis β-Ga2O3 configuration is ideal for customers interested in achieving advanced growth capabilities to support device related R&D efforts in the rapidly growing field. This new reactor set and equipment configuration is based on years of development by Agnitron and was supported by advanced multi-physics process modeling in addition to experimental activities. The team’s efforts resulted in material growth performance not previously known to be possible by MOCVD and represent exciting developments for β-Ga2O3 technologies. Agnitron’s system will support high growth rates which is significant as MOCVD is an industrial compatible process proven capable of large area growth with sharp layer interfaces and smooth surface morphologies – all important considerations for future technology commercialization efforts. Furthermore, Agnitron’s configuration is capable of supporting a broad range of process conditions for studying wider and narrower bandgap alloys, heterostructures, sharp delta-doped profiles and regrowth processes which are all critical for device development programs. Now with a strong industrially scalable material growth foundation the stage is set for improving our understanding of possibilities for β-Ga2O3 power and extreme environment electronics device applications.

A number of recent publications on the topic of MOCVD growth of β-Ga2O3 by Agnitron detail expertise and capabilities held by the team and serve as an outline of foundational growth capabilities possible with Agnitron’s Agilis β-Ga2O3 MOCVD Systems. More information is available in the articles listed at the end of this posting.

In contrast to other legacy equipment vendors Agnitron offers already refurbished and upgraded systems located at out facility in Eden Prairie, MN. Systems are powered up and available for demonstration.